What You’ve Missed…
* Not much really.
* Some Psalms that are pretty good.
* I saw Prometheus.
* That was pretty good too.

“In the year when King Sargon of Assyria sent his commander in chief to capture the Philistine city of Ashdod, the LORD told Isaiah son of Amoz, ‘Take off the burlap you have been wearing, and remove your sandals.’ Isaiah did as he was told and walked around naked and barefoot.” (Isaiah 20:1-2)

“Oh, he was probably just in his house or something. That’s no big deal,” you might say. Oh really? Have you read verse 3?

“Then the LORD said, ‘My servant Isaiah has been walking around naked and barefoot for the last three years. This is a sign – a symbol of the terrible troubles I will bring upon Egypt and Ethiopia.’” (Isaiah 20:3)

Yeah. That’s right. The dude lived totally naked for three years. Even a good streaker wears a solid pair of running shoes. But not Isaiah. He rocked the birthday suit, in its fullness, from top to bottom, day in and day out, for THREE YEARS.

I was talking to a friend about this, and they suggested the idea that times were different back then, with different cultural norms, and that Isaiah putting the family jewels on full public display wasn’t a big deal. But I beg to differ.

I think there are a few common threads uniting mankind through the ages, despite vast cultural differences, and one of those threads is actually the lack of threads. I’m pretty sure straight-up public nudity has always been discouraged for as long as people have lived in community. No one wants to see their butcher naked.

Which got me thinking. How the heck did Isaiah respond? It’s mentioned so casually in the Bible. Heck, it skips three years between two sentences. But think about it. Isaiah was a regular guy. A prophet and powerful man of God sure, but still, he’s human. Just like you and me. I have to wonder how he reacted.

I imagine him saying something like, “Uh, God, I can’t just be naked. I mean, what will people think? Also, I don’t really want to be naked. And, uh, isn’t being naked bad? Like, don’t you endorse purity and honoring the body and stuff? And uh, you also realize that if I’m naked, a bunch of ladies and kids are going to see my dong right? That can’t be good. Won’t I end up in jail? Won’t I end up in jail totally naked? That really can’t be good. And did I mention that women and children will see my dong?”

But apparently he went through with it. He just started living his life in the buff. Not in a nudist colony with a bunch of old fat guys who don’t give a rip anymore, but right out in the open, for all the world to see. And I imagine he continued his work, which was delivering the Word of God, which I imagine was kind of like street preaching.So now I’m picturing some crazy dude on a street corner, warning everyone about the coming judgment of the LORD, with his kosher sausage in full view.

I’m already horribly judgmental towards street preachers. If I saw someone preaching fire and brimstone on the street, and they were naked, I would think they were flat out crazy. I’m already not trusting what they say, and the fact that they don’t seem to be bothered that their twenty-first digit is swaying in the breeze only compounds that fact. 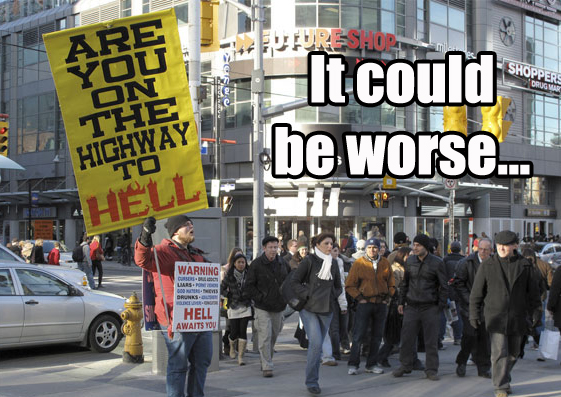 I have to believe it was the same for Isaiah. I have to believe people thought the guy was insane. That he needed help. Lots of help. I imagine people wrote him off as the local nut who thinks he hears from God, dismissing everything he said because they thought he was a deranged lunatic who dove off the deep end, leaving his sanity, and shorts, far, far behind.

So of course Israel doesn’t listen to his warnings. Would you? I know I wouldn’t have. Which has me thinking again. What if the crazy street preachers I judge are actually hearing from God? What if they’re just as reluctant as Isaiah might have been, but go out any way, knowing they’re going to be verbally crapped on, repeatedly, by almost everyone? What if I’m the idiot, not them?

Another thought: What if it wasn’t a crazy stranger on the corner, telling everyone they’re going to hell, that God asked to get naked? What if it was someone you knew and trusted? What if it was your pastor, or best friend? Or your dad. What if they started living naked because they said God told them to? (I promise I’m not trying to get anyone to think about the people they know naked. I’m just trying to make a point, and that point involves tons of nudity.)

Another, different thought: What if it wasn’t someone you knew who was making their “private” business very public? What if God asked you to do it?

Isaiah letting it all hang out takes the idea of being a person of faith to a whole new level. If you think about it, Isaiah really goes for it here. The guy risks his entire reputation big-time, throwing caution, and his undies, to the wind.

12 thoughts on “Isaiah was a Stripper”