One day and three chapters into the project and I’m more confused than when I tried to put my first piece of IKEA furniture together. What the heck? I thought I had a solid grasp of the creation story. However after reading it for myself, I have come to the conclusion that I am just a simple, simple little man. For starters, it seems as if God is more like a cross between Jackson Pollock and a crazy mad scientist rather than…well, rather than God. By that I mean, He comes across not only as extremely creative, but almost experimental in nature (literally).

The first chapter of Genesis describes God’s process of creation and a few times it seems God is deciding things are good as He stops to consider how things are going…not that He had a whole set of detailed blueprints from the get-go.

The land produced vegetation – all sorts of seed-bearing plants, and trees with seed-bearing fruit. Their seeds produced plants and trees of the same kind. And God saw that it was good. (Gen. 1:12)

He SAW that it was good. He looked at what He’d created, made a judgment call that it was good, and so continued on making more stuff. He goes on to have the same reaction to the sun, moon, and stars. Same for the sea creatures and birds. Same for wild animals and livestock. And not to feed your ego…but after making people and seeing all life operating in beautiful harmony that only Walt Disney could be jealous of, He declares it very good. He decides all this after seeing it, not before, like He’s just making it all up as He goes.  Like an artist deciding he likes the direction things are going.

It doesn’t stop there. Later He sees Adam is alone and needs a partner (Gen. 2:18)…and so God, who knows everything, brings Adam all the animals He made, but no suitable partner is found (Gen. 2:20). Wait, what? Doesn’t God know everything? Did he really think an animal would be the best companion for a human? They went through all the animals before God decided to make Eve? What? Why is the process of elimination entering the picture here? I mean, I know it took Thomas Edison 10,000 tries to invent the electric light bulb…he’s human and experimenting. In Genesis we’re talking about the All-Knowing Creator. We’re talking about God. God who does everything exactly right the first time. This isn’t an experiment. Is it?

I’m imagining God saying, “Huh…none of these awesome animals I made are going to work? But there’s so many, and they’re so different. None of them are a good helper? Really? Interesting. Well, I’ll just make something else then. How about a woman…that might work.” And that thought really messes me up.

So maybe God really is a Creator. Someone who creates through process, someone who enjoys the process as much as the result. Maybe artists reflect God and how He works more than I thought.  Maybe God is incredibly creative…wildly creative even.  Not just inventive, but creative. 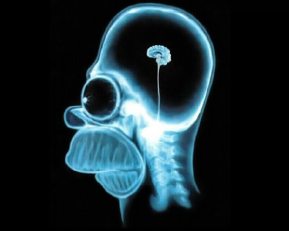 So much to think about, and I haven’t even brought up some of the questions I have from chapter 3.  [Was the serpent that tempted Eve the devil?  It doesn’t say he was.  Did God banish Adam/Eve from the garden because they disobeyed, or because He was worried they would live forever? (Gen. 3:22-23)  And does God worry?  And if God created us to be in relationship with Him forever why does it seem He doesn’t want Adam to live forever? ]

See what I mean? I’m only three chapters into this thing, and my pretty glass house of what I thought I knew and understood about the creation story has shattered all around me. So I’m left looking around helplessly for the only one who can help me rebuild that house. God himself. I can see why I need to ask His Holy Spirit to help me as I read His word. It’s just too much for my simple mind to comprehend on its own. And here I was proud of that college degree I earned.

So, in closing, day one of reading the Bible melted my brain. On to day two.

4 thoughts on “God and IKEA Confuse Me”