What You’ve Missed…
* There’s a lot, and it’s intense.  So buckle up.
* More plagues, and more of Pharaoh’s commitment issues.
* God kills off the firstborn son of every Egyptian family.
* The Israelites escape from Egypt via a newly-parted Red Sea which comes crashing down on the Egyptian army.  Major wipeout dudes.
* God leads His people through the wilderness, providing all the nourishment they need.  This includes ‘Nilla Wafers from heaven and clean water that shoots out from a rock.
* God appears to the Israelites as fire, from a cloud, with lightning and thunder, while a ram’s horn blows, during an earthquake.  (Basically it’s like The Indiana Jones Stunt Spectacular at Disney’s Hollywood Studios I saw as a kid, only…with less Indiana Jones and more of God’s vast power and holiness.)
* The Israelites are attacked and victorious in battle because Moses keeps his hands lifted in the air for an entire day during the fighting.  (Yup, sounds weird to me too.  Also, I’m glad my country doesn’t ask me to fight for them like that.  I can barely get through the YMCA dance without getting a little winded.)
* Moses and a bunch of other guys sit and eat with God on the top of Mount Sinai.  (The author makes a distinct note, with a hint of surprise, that these men were not instantly destroyed as they were allowed to see God face to face.)  I can only wonder what dessert was like.

Seeing as tax season isn’t too far away, and that we’re now in a presidential election year, it’s a pretty good bet you’re going to hear people talking a lot about our tax code, and how whacked out it is  Actually, people talk about this ALL the time, because, well, because, it’s ridiculous.  But before everyone gets their undies in a twist about American tax laws, I’d like to quickly point out it may not be as intricate, nor as obscure, as some of the rules God was handing out to the Hebrews.

God goes over the Ten Commandments with Moses, and it’s all pretty basic stuff.  Don’t steal.  Don’t murder.  Basically, don’t be a jerk, and remember that God is God.  But then He goes ahead and adds some fine print.  Extremely fine print.  Here now are a few of the other rules God laid down along with the Ten Commandments that, even if they were allowed to be displayed outside a public courthouse today, wouldn’t.

* If a man who has married a slave wife takes another wife for himself, he must not neglect the rights of the first wife to food, clothing, and sexual intimacy.  (Exodus 21:10)
* Anyone who dishonors their father or mother must be put to death.  (Exodus 21:17)

And my personal favorite…
* Now suppose two men are fighting, and in the process they accidentally strike a pregnant woman so she gives birth prematurely.  If no further injury results, the man who struck the woman must pay the amount of compensation the woman’s husband demands and the judges approve.  (Exodus 21:22)

Why is this last one even necessary?  What kinds of lives did these people have that this was a problem?  Was the typical Israelite family living like most people who show up on COPS?  “Uh, yeah officer.

We was just wrestlin’ because Timmy wanted me to get him a beer, and I told ‘em to get his own dern self a beer and so he gone and socked me one on the chin for havin’ an attitude pro’lem.  So’s I went and hit ‘em back.  We tussled ‘round in front of the tv some, and then my old lady walked in and caught one in the jaw and dangit if I’m not a monkey’s uncle and she went into labor right then and there.  And now we’s gots twins!  Oh, no sir.  That’s not drug paraphernalia on the table.  That stuffs fer my asthma.”

There’s a lot more of these kinds of crazy laws.  Mostly centering around farm animals, money lending and court cases.  Yup, I think that solidifies it in my book.  Life with the Hebrews was much more like COPS than any of the Sunday school cartoons about Bible life I ever saw growing up.

I guess between the Flood and Sodom and Gomorrah, God realized we needed just a little bit more guidance in how to not be total idiots.  Though, hopefully we’ve progressed somewhat since the time of Moses.

What You’ve Missed…
* We’re in the book of Exodus now, and three-hundred years after the time of Joseph, all of Abraham’s descendants, The Israelites, have become slaves in Egypt.  They’re pretty pissed about it.
* About this time, Moses is born.
* Around the age of forty, Moses takes the law into his own hands, becoming the world’s first vigilante hero, when he murders an Egyptian guy who’s beating up some Hebrew dude.  (I’m thinking the local papers referred to him as “The Sackcloth Sucker-Puncher.”)
* Around the age of eighty, Moses doesn’t encounter God-As-A-Talking-Tornado, but rather, God-As-A-Talking-Bush-On-Fire.  (Not to be confused by The-Now-Not-So-Implausible-Singing-Bush from The Three Amigos.)
* God-As-A-Burning-Bush tells Moses He is going to rescue the Israelites from slavery, and that Moses will act as His mouthpiece.  Moses goes all King’s Speech, whining about his stutter, and so God brings Aaron (Moses’ older brother) on board to announce to everyone all the things God speaks to Moses. 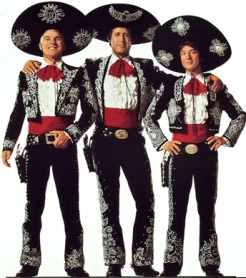 * Finally…God gives Moses an awesome staff that He turns into a snake from time to time.  (Finally answering the question, “What do you get the man who has everything?”)
* Got all that?

Whew…let’s all take a breather, because that’s a lot to digest.  Go ahead and grab some coffee or a quick smoke break or something.  I’ll wait.

So old man Moses is taking direction from God on how to get the Israelites out of Egypt, and because he’s human, and because God can be confusing, he protests and questions some of God’s plan.  But in the end he trusts God and does as he’s asked, providing the people of Egypt the craziest experience of their lives.

You see, God doesn’t just want to rescue His people from slavery, He also wants Pharaoh to know He is The One True God.  So He puts on a little display to demonstrate His power.  And we’re not talking about a mind-blowing Pink Floyd laser light show.  For starters, when Pharaoh refuses to let the Israelites go, God turns the Nile River into blood.  He doesn’t stop with just the Nile, but all the water in Egypt (including the water in jugs, cups, storage basins, etc.) also turn to blood.  And it lasts for seven days. 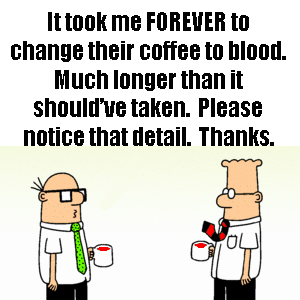 Let’s just stop and imagine this for a second.  You’re meeting someone for lunch, and as you take a sip of your water, you realize it’s blood.  The whole restaurant realizes what’s happened at roughly the same time, and people start screaming and freaking out.  Or maybe you open the washer to discover your clothes aren’t pink because you washed colors with the whites, but because they were “washed” in blood.  Or perhaps you’re standing around the water cooler at work (do people actually do this in real life, or just in Dilbert?) when all of a sudden you and your co-workers find yourselves standing around the blood cooler instead.  (Or think about if it happened while you were in the shower.  That’s something straight out of The Shining.  And that gives me the heebie-jeebies.)

I think you get the idea.  This is not a normal thing.  People notice when ALL of the water in their life turns to blood.  That’s a pretty strong showing of power in my book.  But apparently Pharaoh didn’t think so, because he didn’t let the Israelites go.  In fact, his own royal magicians also turned water into blood (Exodus 7:22) which is pretty impressive.

So God moves on to Phase Two and produces a plague of frogs.  Frogs start showing up everywhere, including people’s ovens (Exodus 8:3) which makes me wonder if they were instantly incinerated, or whether they were special “plague frogs” that were a lot harder to get rid of.  (Also, it says that Pharaoh’s magicians summoned frogs too…which makes me wonder if they could have had the most amazing magic show Vegas has ever seen.)  But again…can you imagine what that was like for everyone in Egypt?  Think about the noise at night alone when millions of frogs are croaking at once.  Or the fact that you’d be walking on frogs (living and squashed) everywhere you went.  That would get really old, really fast.

So Pharaoh relents saying he’ll let God’s people go…but as soon as the frogs are gone, he changes his mind.  This pattern of relenting and then changing his mind continues as God brings more plagues on Egypt, setting the standard for a man struggling through some very serious commitment issues.  During this time God also brings on a plague of gnats, a plague of flies, a plague destroying all the livestock in the country, a plague of boils appearing on everyone and a plague of hail.

Seriously…think about if this was you.  First, all your water becomes blood.  Then your house, car, workplace and everyplace are covered in frogs.  Then you’re constantly covered in gnats ALL THE TIME.  And if that isn’t enough, later you’d be covered in flies everywhere you went.  (I don’t think anyone is gettin’ “lucky” while this is happening either.  Being covered in gnats and flies tend to really destroy the mood.  So on top of suffering, everyone’s also in a major “dry spell” which I’m sure upped the tension in Egypt a hundred-fold.)

Later, all the animals around you die.  Then you’re covered in boils and finally everything you own is destroyed by hail.  That’s a rough couple of weeks right there.  And what if you found out the reason for it all was because the leader of your country was acting like a complete turd?  I imagine Pharaoh’s approval rating would be zero, and that the Occupy Egypt movement would be more of an Angry Violent Mob Out For Blood Movement.  (Though being out for blood would be slightly ironic.)

So…yeah.  Evil dictators are the worst.  Also, between this and the book of Job, I think God is doing a pretty solid job of showing us that having a fairly normal life, without being covered in boils, is a pretty huge gift in-and-of itself for mankind.  Welcome to the book of Exodus.