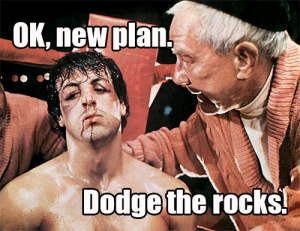 What You’ve Missed…
* A lot of talk about circumcision.  I mean, A LOT.  More than you’d think you’d find in a really holy book.
* An angry mob attacks and stones Paul.  Everyone thinks he’s pretty much dead, but then he just gets up and walks away.  It’s kind of like the final scene in Rocky, except he’s getting hit in the face with rocks, instead of padded boxing gloves.  And there’s less Burgess Meredith.
* Paul casts a demon out of girl who was following him around, because the demon just got really annoying after awhile.  This is basically the New Testament version of Jackie Chan and Chris Tucker in Rush Hour.
* Paul gets beaten a second time.  It’s not as much like Rocky II as you’d expect, and there’s still no Burgess Meredith.

So how does Paul handle a serious ass kicking and then being wrongfully imprisoned?  Like a champ.  The guy spends his time singing hymns while the other prisoners listen.  Basically he doesn’t let the man get him down.  I mean, he has a better attitude than that guy in The Shawshank Redemption, which is pretty hard to beat.  Instead of complaining and whining, the guy just starts up a karaoke club, belting out the hits late into the night.  Turns out God’s a pretty big karaoke fan, because here how He responds. 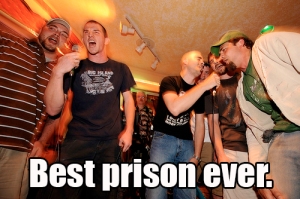 “Suddenly there was a massive earthquake, and the prison was shaken to its foundations. All the doors immediately flew open, and the chains of every prisoner fell off!  The jailer woke up to see the prison doors wide open. He assumed the prisoners had escaped, so he drew his sword to kill himself. But Paul shouted to him, ‘Stop! Don’t kill yourself! We are all here!’”  Acts 16:26-28

It seems to me that any normal person would take advantage of the situation immediately and get their butt outta there pronto.  I mean, I hate to run, and have yet to find even adequate motivation to start jogging, but I promise you if I were Paul, I would channel the whitest Usain Bolt I could find inside of me and leave that place in the dust, setting some serious Caucasian speed records along the way.  I would do that because I’m normal and my brain works.  But Paul isn’t normal (though I admit his brain does work).  Paul apparently doesn’t feel the need to free himself, he just kind of goes with the flow.  And in this case, the flow has the jailer take Paul and other prisoners home, take care of their wounds, feed them and then become a Christian along with his entire family.

What!?  What jail guard takes prisoners home!?  None.  Because that’s totally crazy.  (Though I think this happens in The Green Mile?  I’m not sure.  I’ve never seen it.  Regardless, if it did happen in The Green Mile, it’s still an extraordinary event,

which is probably why it was such a powerful and memorable scene.  That or there was some cool special effects or something.)

Anyway…not only could the jail guard get fired, but this is a Roman jail…and from my education of Romans through movies and bad Sunday school videos, they would feed the jailer to lions or something if he got caught.  I mean, the guy would have some kind of violent Gladiator death for sure. Yet this jailer saw something so completely different in Paul than he’d ever seen in anyone that he risked his own life to learn more about it.  That’s nuts.  That is seriously nuts.