What You’ve Missed…
* A dude named Gideon becomes Israel’s judge.
* Gideon asks God to prove that His promises are true through two tests involving a fleece and morning dew.  I wonder if Gideon was rocking the same North Face fleece that every totally-suburban guy wears to show that he’s fashionably outdoorsy, and not really suburban at all.  (Note to those guys: it isn’t working.  Note to self: this applies to you.)
* God has Gideon reduce his army of 32,000 men to just 300 in order to defeat their enemies.  It’s never discussed just how sculpted and/or rippling and/or perfect the men’s abs were.
* After Gideon dies, his son Abimelech, who is 70th in line to rule after his father, kills ALL of his brothers in order to claim leadership.  While that’s a ridiculous expression of his need for validation, what blows my mind even more is that Gideon had seventy kids!  Geez Gideon, go easy on the ladies buddy.  Someone needs to invent a cold shower for this dude, pronto.

After the romping sex adventures of Gideon come to a close, and his son Ambimelech dies in battle, a new judge named Jephthah is raised up to lead Israel.  (Don’t worry.  This guy has more on his mind than just getting it on with every woman who exists at the time.)

In fact, our friend Jephthah is focused on an upcoming battle against the Ammonites.  Jephthah wants to lead Israel into certain victory, so he makes a deal with God.

“Jephthah made a vow to the LORD.  He said, ‘If you give me victory over the Ammonites, I will give to the LORD whatever comes out of my house to meet me when I return in triumph.  I will sacrifice it as a burnt offering.’”  (Judges 11:30-31) 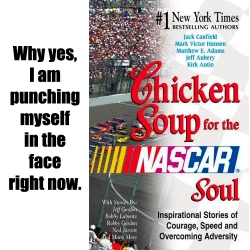 Now, I get that Jephthah is eager for victory, but I’m not so sure the guy thought this one through.  I mean, what’s he expecting to come out of his house?  A chicken?  Ok, but why are there chickens running around inside anyway?  (NASCAR and Mississippi haven’t been invented yet.)  And why would a chicken come out to greet him?  Maybe a dog then?  I could see that.  He returns home from battle and his loyal canine companion runs out, eager to slobber all over him?

But even so…Jephthah would then have to kill his own dog, and no man can really bring himself to do this.  C’mon on.  We’ve all read Old Yeller, and we’ve all bawled our eyes out when that little boy had to shoot his very own dog.  That book destroyed me as a kid.  And Where the Red Fern Grows?  Another demonstration of the pain of a beloved dog death.  (And I never read White Fang…but I bet something sad happens with him too.)  So, I can’t imagine ol’ Jephthah voluntarily offering up his sweet li’l pup as a sacrifice.  I don’t know what the dude is thinking on this one. 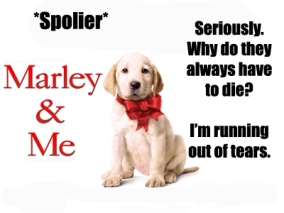 Anyway…he goes to war, and God grants him victory.  So Jephthah returns home, only to be greeted by…drumroll please…his daughter, who is his only child.  Not the homecoming he was expecting.  So as a rational man you’d think he’d say to God something like, “Oh…you know I didn’t mean a family member right?  I mean, I know I didn’t get all specific, but we both know having to offer you a person I love dearly wasn’t really in the cards.  I mean, that would be ridiculous.  You wouldn’t want me to do that right?  Right.  So, let’s just see what else comes out of the Casa de Jephthah that I can offer to you.”

But he doesn’t do that.  Jepthah is truly a man of his word.  In complete agony he tells his daughter that he’s made a vow to God that involves her, that he cannot take it back, and that it’s not going to end well for either of them.

So how does she respond?  Well…another drumroll if you’d be so kind…she pretty much says, “Ok dad.  You made a vow to God, so do what you gotta do.  But before it goes down can I have two months to head up into the mountains with my friends to cry about this, because I’m going to die a virgin.” 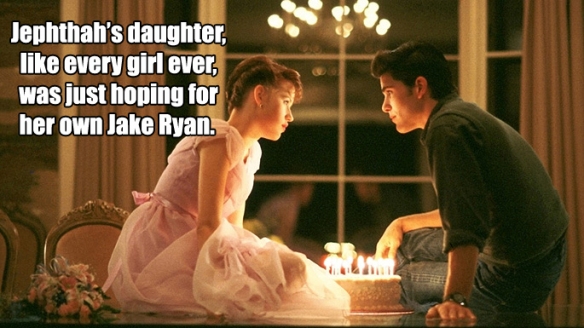 What!?  Who are these people?  Dude doesn’t back out of the deal because it got way more intense and crazy than he anticipated.  Dude’s daughter doesn’t say, “Are you kidding me?  You don’t run my life.  Whatever, I’m going to the mall.  Can I have $20?”  But instead, honors her father to the point of willingly dying without ever getting to have some awesome sex, so that he is able to fulfill his own commitment to God.

(And can I add how I love that this girl is clearly a normal, hormone-filled teenager who views sex as the greatest, end-all be-all thing on Earth, to the point that she is less upset about having to die than she is about never having the opportunity to get it on and maybe have kids?)

So, not to spoil it for you, but two months later the daughter comes home from her mountain retreat and Jephthah offers her as a burnt sacrifice to God.  I can only wonder how he explained all this to his wife and neighbors, who I assume thought he had completely lost his mind.  This must have been the single worst day of this man’s life, and I cannot even begin to imagine the level of grief and sadness he endured because of it. 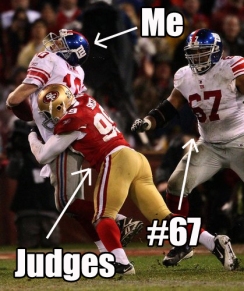 Honestly…we talk about putting God first in our lives a lot as Christians.  We talk a lot about being men and women of our word.  For me, this takes it to a whole new level.  Things just got real.  Here is a story of a man who really did put God first, and who honored the commitment he made, no matter how incredible the cost to himself.  Yeah, I didn’t see this one coming at all.  Way to blindside me Judges.

(For more thoughts on this as it pertains to God’s incredible love for humanity, check out a companion piece I wrote entitled, God Doesn’t Love You.  Catchy title huh?)